For our flight to Brussels, we had to get another 3:30 am wake up call thanks to Ryanair’s early flight schedule. On the bright side, we did end up there without a problem this time, ending up in Brussels bright and early.

From the second our feet touched the ground we knew the city was going to be a different experience from Prague. Prague was exceptionally clean nearly everywhere, including public transportation, but in Brussels from that first train station we stepped foot in, we knew that that was not always going to be the case here. I do fully believe that you should have an open mind while traveling, however, so I really wanted to do my best to experience the entire city before making any negative judgments.

Once in the city, we decided to hang out with Lauren’s sister Tiffany for the day since we will not be seeing her for an extended period of time. We picked her up at her hostel in an obviously not great part of town where she preceded to tell us about her hostel-mate getting robbed in the city center the day before and how she had to get an escort from her hostel to the ATM the night before. None of these things were doing much for our initial view of the city, but we were determined not to let these things get to us.

With Tiffany in tow, we explored some of the more touristy parts of the city, first stopping at Moeder Lambic, a highly recommended beer shop that focuses more on drafts than the normal Belgian bar. We got to relax outside and try some of the beer that Belgium is famous for which was quiet and laid back with a nice neighborhood vibe. Here we got to let our proverbial hair down and enjoy ourselves and the city more (I’m sure the beer helped).

Next, we took a trip to the famous Grand Place in the city center with its opulent city hall and cobblestone walkways. The square is the biggest tourist attraction in Brussels and is actually a UNESCO World Heritage Site, a designation given by the UN for places with “outstanding cultural or natural importance to the common culture and heritage of humanity.” The surrounding buildings and opulent guild halls are the epitome of Gothic architecture with their many spires, flying buttresses, and eclectic blending of architectural styles. The square itself is very beautiful and is a must see when visiting Brussels.

The other great thing about the Grand Place is that a lot of the sights worth seeing in Brussels are very close to it. The most famous sight nearby is the Manneken pis which is, no joke, a foot tall statue of a little boy peeing into a fountain. The statue has hundreds of costumes that it is dressed up in depending on certain events or holidays. It is said to embody the people of Brussels’ sense of humor and independence of mind. Personally, I think it is a little strange, but who am I to judge. 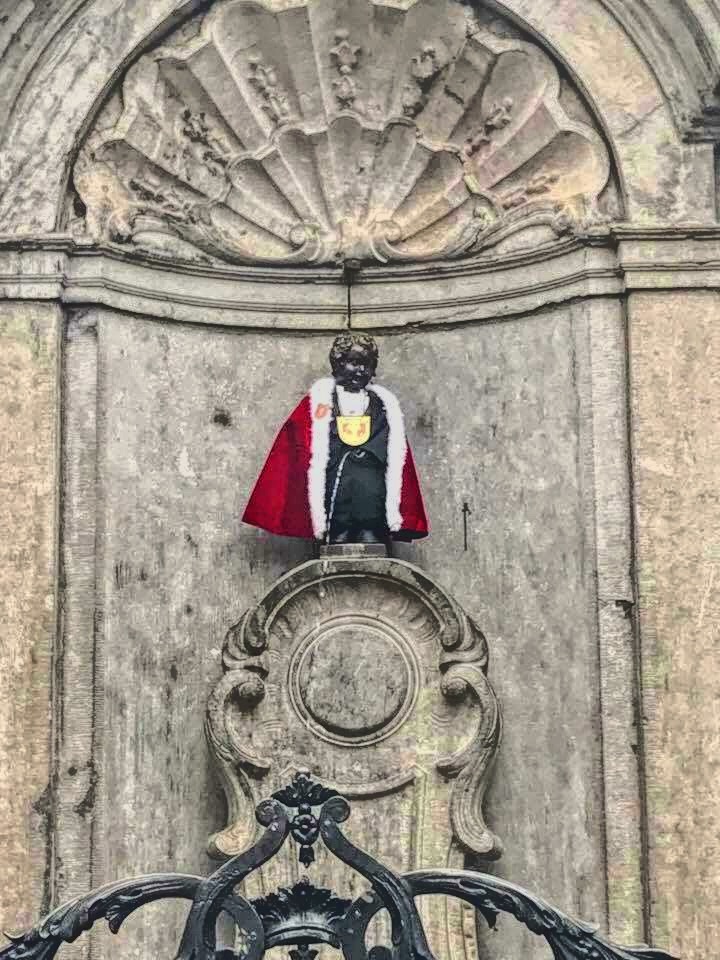 Also around the city center is a number of Belgian waffle vendors which we most definitely had to check out. There was upwards of 20 different ways in which these places serve their waffles, including ingredients like Nutella, strawberries, caramel, whipped cream and many other different combinations of sweets. After indulging on a few of these we made our way to a nearby “Irish pub” called Celtica which besides the classic dark wood bar seen in nearly all Irish bars was nothing like what you would associate with Ireland. At the end of the day, though, we went for the cheap beer and thanks to the happy hour from 1pm to midnight, that is exactly what we got. 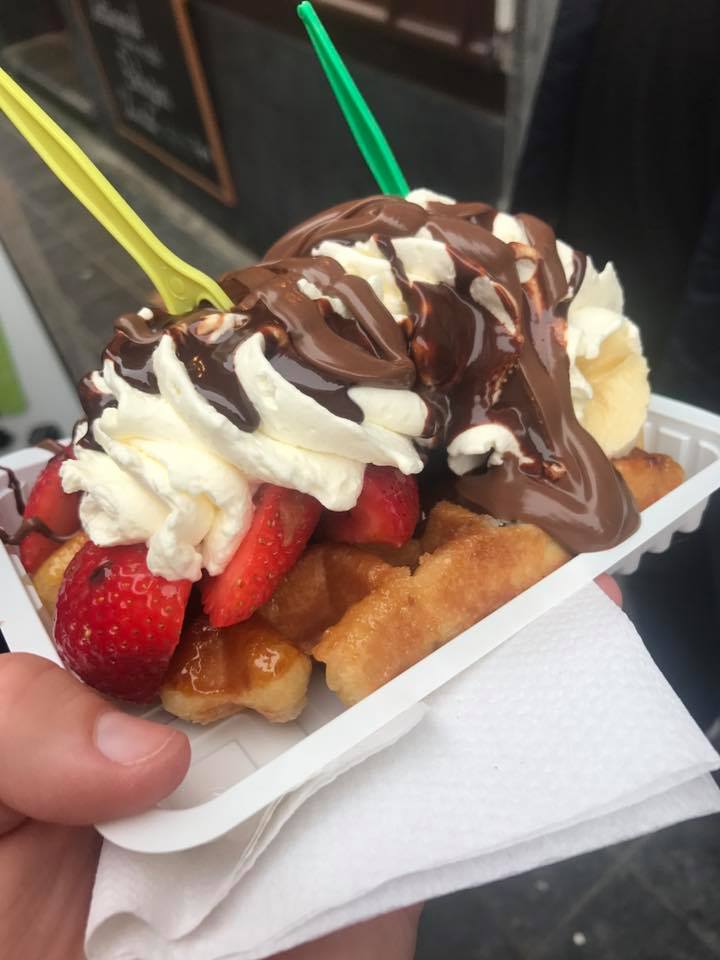 The next day we were pretty worn out from the traveling the day before so we did not venture very far out of our Airbnb. Plus, of the museums we wanted to visit, all happened to be closed on Mondays. Tiffany came over in the morning and we went shopping for groceries where Tiffany offered to make us lunch before leaving to head home. She made us an appetizer of sliced tomatoes with mozzarella, pesto, and a sprinkle of balsamic vinegar. To top it off we had meat ravioli. Shortly after our delicious lunch, we were forced to say our goodbyes to Tiffany.

It is definitely getting real that the number of friendly faces we know over here are starting to dwindle down as both of our families are all (besides Logan) now safe and sound back in the states. We are both already starting to miss everybody back home.

If it wasn’t already evident by my posts thus far, one of my favorite things in the world is beer. Luckily for me, I have hit some pretty awesome countries for beer so far on this trip and Belgium is far from an exception. Because of their long history of brewing, I of course had to make sure that I visited at least one brewery whilst visiting the country.

The unofficial yet pretty official national beer of Belgium is the Lambic. The thing that sets Lambic beers apart from any other type of beer is that they are spontaneously fermented. All other beers, from Natural Light to Guinness have yeast physically introduced during the brewing process which eats the sugars in the wort (not yet fermented beer) and converts them into alcohol. Lambic beers, on the other hand, sit in large vats at the brewery and are open to the air, allowing natural yeast in the air to get into the beer and do its thing. This method of fermentation allows for a different tasting beer with each batch. This is the way that beer was brewed for thousands of years before advances in brewing technology and knowledge changed it to the current method used by all but a handful of breweries worldwide. There is no question this method is a dying art.

The Cantillon Brewery, which is one of those few breweries that still use this traditional method is based in Brussels and luckily we got a chance to tour it and taste some of its lambics. If you were not told what you were drinking while having a lambic, you might think it is a type of wine. The way the brewery describes lambic is that it is the missing link between beer and wine which I think is a very good description. Fruits are often soaked in lambics to provide flavor to the beer but no extra sweetness. It tastes like no beer I have ever had: it is a little sour but not overly so, it is very dry but also crisp. I would compare it flavor wise to a cider with a little tartness in place of sweetness. I liked it, at the very least for its history, though Lauren did not.

Since we had hit two-thirds of what we consider Belgium to be known for, we wanted to hit the trifecta afterward so we headed off in search of Belgian (French) fries. We ended up at a popular joint called Fritland to get some steak style french fries with one of the 10+ different sauces they have for dipping. Since ranch is practically unheard of outside of the United States, Lauren opted for a garlic aioli and I got plain mayonnaise which may seem weird to people in the United States since we don’t really use it as a dipping sauce. However, it is pretty standard fare over here and actually very good.

For our last day in Brussels (but not in Belgium) we went on a wild all day adventure in an attempt to find what is called by many to be the best beer in the world, Westvleteren 12. Westvleteren is a brewery founded at the Trappist Abbey of Saint Sixtus in the little city of Vleteren in eastern Belgium. The beer has been brewed on site by Trappist monks for more than 175 years and the brewery itself is one of only 11 Trappist breweries in the world.

Westvleteren 12 is known not only for being one of the best beers in the world, it is also known for being ridiculously difficult to find. The brewery produces only 60,000 cases of beer a year. For comparisons sake, if every student at Dayton drinks a little more than a case of beer per weekend it would take roughly a month to drink as many beers as Westvletreren produces in an entire a year.

In addition to the lack of beer produced by the brewery, there are only two places in the world that you are able to buy the beer, the brewery itself or the cafe next to it. Sales are limited to one order every 60 days per person per license plate and phone number. Also, the beer must be reserved in advance by calling a specific phone number, which due to its demand, may or may not be answered by the monks. There are no wholesalers of the beer and the brewery is strictly against the resale of any of their products.

Knowing these facts and that we were in no way going to be able to go to the brewery, Logan and I went on a mission to find someone willing to sell Westvleteren to us on the black market. Starting from our Airbnb, we found a hint in a dark corner of the internet of some shady business rumored to sometimes have the beer available. Working off this tenuous lead, we started our trek to the other side of the city. Soon it became obvious we needed another mode of transportation as it was quite the distance to our goal.

We debated whether the pigs would be able to use my credit card to track us down but convenience won in the end so we ditched our walking shoes in favor of a couple of rented bicycles. All in all, it was a 3 and a half mile trip there and back (uphill both ways!) through a maze of dark and seedy alleyways but in the end we managed to reach our destination. After barely convincing the non-English speaking shop-owner of our trustworthiness we made our purchase (12 euros a bottle) and got the hell out of Dodge, beer tucked carefully into my bicycle basket. Disclaimer: this story was not embellished in ANY way. Side story: we walked into a shop in the city center of Bruges 2 days later to find the same beer at the same price. Apparently, the black market is bigger than we thought. Oh well, it was worth it. 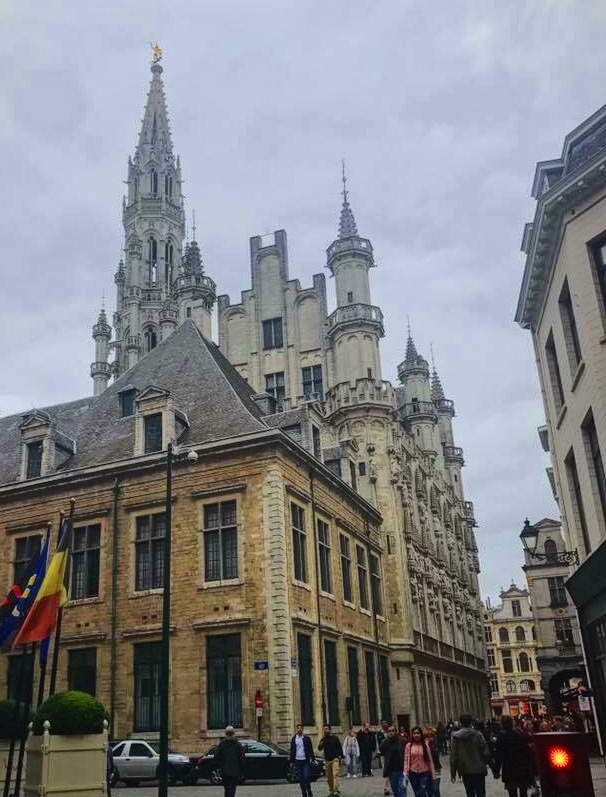 For those wondering about the beer itself. It is indeed one of the best beers I have ever had. It is a nice, well-balanced, dark beer. It is a little sweet and boozy (10.2% abv) with very complex fruity and caramel flavor notes that change throughout the sip. It is a really well balanced and delicious beer. 10/10 would love to drink again.

Though Brussels was not our favorite city in the world, upon further reflection, I think the reason we didn’t feel great about the city was the daily trip we had to make through the rough part of town that left us feeling on edge both going into the city and going back out. We did manage to enjoy ourselves a lot in spite of our misgivings and see some really great sights (and taste some great beer!). Plus, the place we stayed in was the nicest we have stayed in thus far. All-in-all, I have no regrets coming to Brussels, we will have to see how the rest of Belgium is!