Our next city in Belgium was to be Ghent. One of the coolest thing about visiting Belgium is that every other city is just as beautiful and just as unique as the previous city and all of the major cities are within an hour of each other. For that reason, even though the next four nights we were to spend the night in Ghent, we were able to take day trips to both Bruges and Antwerp.

My first thought upon stepping off the train in Ghent was how alive it feels. The train station was full of university students – of which there are 40,000+ at Ghent University –  which give the city a vibrant feeling that I didn’t get when I got to Brussels. My second thought regarding the city was how beautiful it was. The buildings have a unique medieval feel to them, made largely of stone and bricks with many having stepped gable facades at their apices as can be seen most obviously in the red building on the right-hand side of the picture below:

Ghent is in the heart of the Flemish region of Belgium which language and culture is more akin to Dutch culture whereas Brussels is more inspired by French culture and language. Wanting to get a feel for Flemish culture, upon doing some research we discovered a local dish called Stoverij which sounded absolutely delicious to us. Stoverij is a beef stew made with a generous helping of dark beer in which the beef soaks in, resulting in meat that falls apart in your mouth. It is often served with French fries. We stopped at the city center upon arriving to get some Stoverij which started a love affair for us for the whole rest of the time we stayed in Belgium. 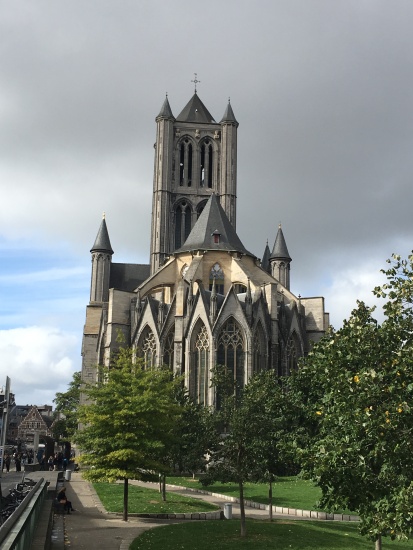 Later, after dropping our stuff off at our place, Logan and I did a quick tour of our surrounding area. We had seen a large, imposing looking cemetery on our way into town that we both thought looked cool so we walked around it looking at all the varied and unique gravestones it contained. Eventually, we came upon a large memorial in remembrance of all the soldiers from that particular area of town that lost their lives in both World Wars. That was something I have noticed in nearly all of the places we have visited thus far in Europe, all have some sort of monument for those that died in either one or both wars and I think that is a really interesting and touching tribute. It is also quite touching for me seeing just how every city, town, or village in Europe was directly affected by the wars. It really helps to put things into perspective.

After, we took a trip to the store to pick up some groceries for our stay, including some hamburger flavored potato chips which I have not seen before in the United States and  divided the group. Logan and I liked them, but Lauren did not.

The next day was the start of the torrential downpour that lasted for rest of our Belgium trip. We tried to get a fairly early start to the day but were slowed a lot by the heavy rain throughout the day. One of the things on our list to do was thankfully mostly indoors so upon finding a break we scurried over to Gravensteen, a small castle built in the middle of the city.

Gravensteen, which translates to the “castle of the counts,” was built in 1180 and was originally modeled after the crusaders castles that count Phillip Alsace encountered during the Second Crusade (1147-1149). The castle was the seat of the counts of Flanders for a couple hundred years before morphing into a courthouse and then a prison. Later, it fell into disuse and almost demolished but was saved by the city of Ghent in 1885 and renovated.

Inside the castle there is an historical collection of arms which contains several impressive weapons ranging from a couple amazing and intricate ivory-inlaid pistols to a wicked 6 foot-long flame-bladed zweihander sword. Among these weapons was an executioner’s sword which I found interesting as its maker didn’t even bother to put a point on it since it simply did not need one for its intended purpose.

Also in the castle is another museum called the Museum of Judicial Objects. This sounds like an exceedingly lame museum until you find out exactly what they mean by judicial objects is actually torture devices along with other instruments used to dole out punishment. At the time Gravensteen was a jail, prisoners could not be punished without a confession, so naturally they punished you until you confessed. Among the artifacts in the Museum of Judicial Objects were thumb screws, a little hammer for crushing one finger at a time, a torture wheel, a torture rack, and the mask of shame. Once the confession was coerced out of them using these methods, the captor had access to even more punishment devices including a knife used to cut off convicts hands that makes your standard chef knife look like a butter knife, or a guillotine for beheadings, both of which the museum possess. 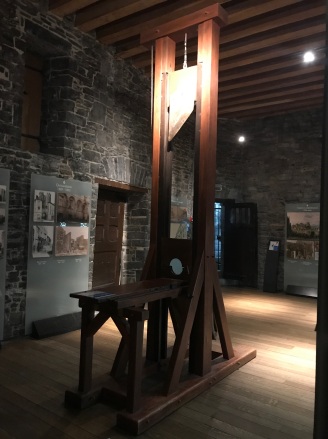 Together, these museums in the castle, along with all the other parts of the castle, is well worth the money needed to get in, especially the view from atop the castle which provides you of a beautiful panoramic view of the city. Later on, as we made our way back to our Airbnb, we made sure to visit what many places called the most beautiful spot in Ghent called Graslei where you are able to see a lot of the more beautiful buildings in town from one place.

The next day we went on our day first day trip from Ghent to Bruges. Luckily for us, Bruges is a relatively small town so we figured we only had to spend a half day there. Before then, there was one final stop in Ghent we wanted to see before we left, St. Bavo’s Cathedral (pictured on the left).

Like all the cathedrals we have visited already in Europe, St. Bavo’s is stunning with it’s high vaulted ceilings and priceless painting and sculptures. What drew our attention to the cathedral, however was a painting that was commissioned in 1420 and completed in 1432 which is quite interestingly named the “Adoration of the Mystic Lamb.”

Also known as the Ghent Altarpiece, the piece is a very complex arrangement of 12 interior and 12 exterior paintings depicting among many other things, a ‘Mystic Lamb’ bleeding into a chalice. The piece has been hailed as being one of the most renowned and important paintings in art history and is very beautiful to see if given the chance.

This website (since you are not allowed to take pictures of the altarpiece) allows you to view the piece in glorious detail boasting over 100 billion pixels worth of ultra high-definition photography. The detail you can see is simply amazing and shows once and for all why the painting is seen as one of the most famous panel paintings in the world. Bonus fact: it also has one of the more unique backgrounds having been stolen many times throughout its existence.

From there, we hopped on a quick train to Bruges!