With our exploration of the surrounding area complete, we took a few days to explore the city of Heidelberg. Heidelberg sits on the Neckar river and is one of the few cities in Germany that totally avoided bombing in World War II, leaving the baroque charm of its narrow streets, its quaint and colorful houses, and its already half-ruined castle intact. The aforementioned castle ruins, along with Heidelberg University – the oldest university in Germany – are the two biggest draws to the city so we naturally set out to see a little bit of both.

Both the University and the castle ruins are highlights of the Altstadt, or Old Town, the town’s historical city center. There is a bridge that leads directly to the Altstadt called the Alte Brücke, or the Old Bridge, which was built in 1786 and is a well-known symbol of the city.  The bridge is one of five situated over the Neckar River and is the largest among them. It is one of the best viewing points in the city allowing you to see much of the old town and the castle above, all nestled into Heidelberg’s beautiful natural surroundings. After arriving in the Altstadt, a trip to Heidelberg is not complete without a stroll down Hauptstaße (main street), the longest pedestrian shopping street in Germany and home to some spectacular shops and restaurants which takes you past both the University and the beautiful Church of the Holy Spirit, with the street culminating in the beautiful castle ruins.

As I mentioned earlier, Heidelberg University was established in 1386 and is the oldest university in Germany. Before heading to the castle we bought a ticket to the Old University building which includes access to the University Museum, the Great Hall and the Student Prison, all for an extremely reasonable price. The University Museum is a small exhibition which details the University’s exciting history, including its beginnings and role in the Third Reich.

Heidelberg University’s student prison is one of the more unique and interesting things we have seen on our journey. The jail, called the Studentenkarzer, was run by the University from 1823 to 1914 when it had legal jurisdiction over their students rather than the police at the time – any transgression committed by a student and found by the police was given to the University to handle.  Sentences lasted between just two days and a month and could result from any number of things such as disturbing the peace, drunken behavior, or staging an illegal fencing duel. Though the prison was an official jail at the time, getting sent there was fairly comfortable and easy, and eventually turned more into a badge of honor for students rather than a punishment. While there, students spent time immortalizing themselves in the prison by drawing, which commonly meant silhouettes of other incarcerated students, writing poems, or visiting other students in the prison. After just two days of bread and water only, Students were free to have friends bring them outside food or even beer. The relaxed feeling toward the prison by students can be seen by the ironic names they gave to many of the rooms such as the Royal Palace or the King’s Throne.

The Königstuhl Mountain rises up behind the Studentenkarzer and the rest of the city. To get there you take a 100-year-old wooden funicular train – which is an experience itself – to the top of the mountain which offers a nice view over Heidelberg and the Rhine Valley. Unfortunately for us, we were not able to take the train up the mountain due to construction, but there is a replacement bus service that will take you to the top instead.

On your way up to the mountain’s peak is the beautiful Heidelberg Castle. Construction began on the castle in 1214 with the castle evolving over time before many parts of the castle got destroyed by either lightning, which happened twice (1537 and 1764), or by invading armies. It was never fully rebuilt. There is both a guided tour and self-guided audio tour available but we took a guided tour to be able to get into the castle which is not otherwise available. Our guide took us throughout the castle, telling us its history while showing us what the exterior of the castle once looked like, as well as how the still-intact rooms would have been furnished in the days when people used to live there. 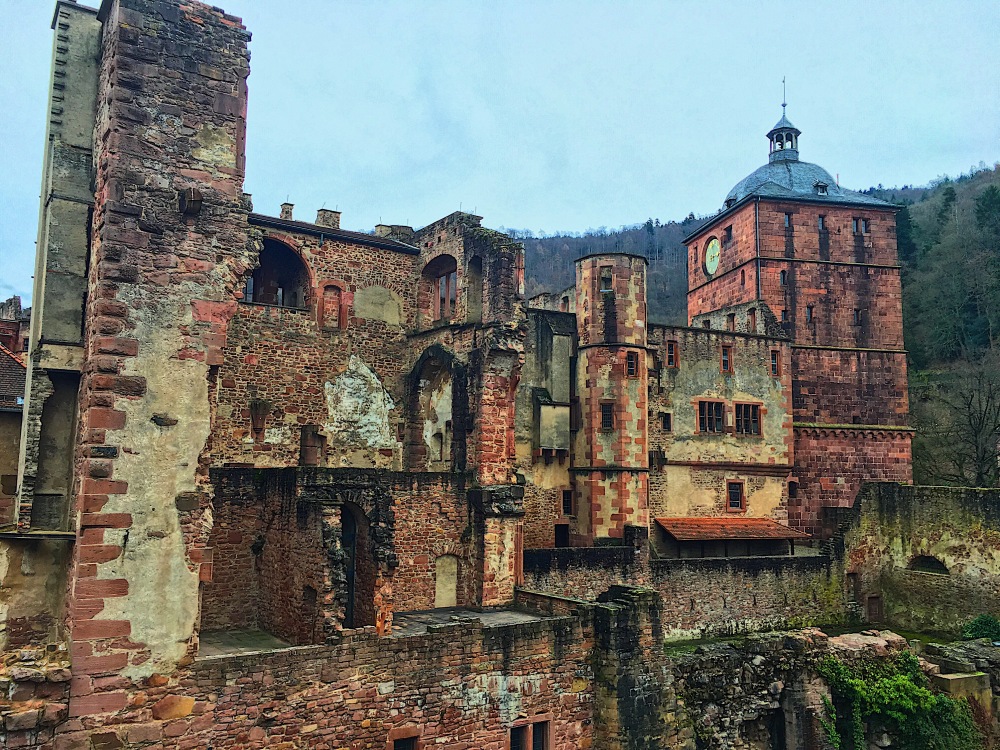 A ticket into the castle also gets you into the Apotheke (pharmacy) Museum on the grounds of the castle, along with the Heidelberg Tun.  The Apotheke Museum contains  20,000+ artifacts relating to pharmaceutical medicine and how it has evolved over time. Inside, there are fully preserved examples of the meticulously planned and ornate pharmacies that predate the sterile all white ones in use today. Inside each pharmacy are labeled drawers and little bottles for hundreds of natural ingredients thought to have healing properties. Also on display are close-up examples of some of these ingredients along and with information on what they were used for. Finally, there are many examples of tools and other often strange-looking devices that pharmacists would have used daily to treat their patients. Though it is a small museum, the Apotheke Museum is incredibly interesting and surprisingly beautiful, as well as free to get into.

Also on display in the castle is the Heidelberg Tun, the world’s largest wine barrel capable of holding up to 220,000 liters of wine at any given time. To get an understanding of its size, the Tun is said to have taken more than 130 oak trees to build it and is so large that there is even a dance floor on top of it capable of easily holding upwards of 20 people on it. Though it is not in use today and has been empty for most of its life, the sheer enormity of this behemoth of a wine barrel is still amazing to behold.

There are many more interesting and amazing things to see and do in Heidelberg. While in the Altstadt we found a brewery and hotel called Kulturbrauerei which had amazing beer along with some simply fantastic authentic German food. We went there twice while in Heidelberg and would definitely go back again with more time in the city. I also cannot help but recommend a trip to O’Reilly’s Irish Pub where Lauren and I spent a little too much time at over our three weeks in Heidelberg, largely due to their way better-than-average pub grub.

The Church of the Holy Spirit, which I mentioned earlier, is one of several churches in Heidelberg but it stands out as being the largest and having the most interesting history. Up until 1622, the church held the Palatine Library which was a collection of books that at the time was one of the finest collections of books in the world and the oldest collection in Germany. To save the collection after Heidelberg was captured, the books were moved to Rome where many still reside today. The rest of the collection, about 80 in total, are still part of the University of Heidelberg’s library today.

As with every city in Europe, there is, of course, a soccer team near Heidelberg called TSG 1899 Hoffenheim. There is a 30-minute train to Hoffenheim and Lauren was gracious enough to come with me and we watched as Hoffenheim, who are in the top-most division in Germany, beat up on the team from Wolfsburg 3-0. We had a really good time as neutral supporters taking in some of the differences between the German league and the English league. These differences include the allowance of standing room only seats and the waving of large colorful flags in the supporters section, as well as the ability to drink beer while watching the game (which means I didn’t miss any goals this time!). 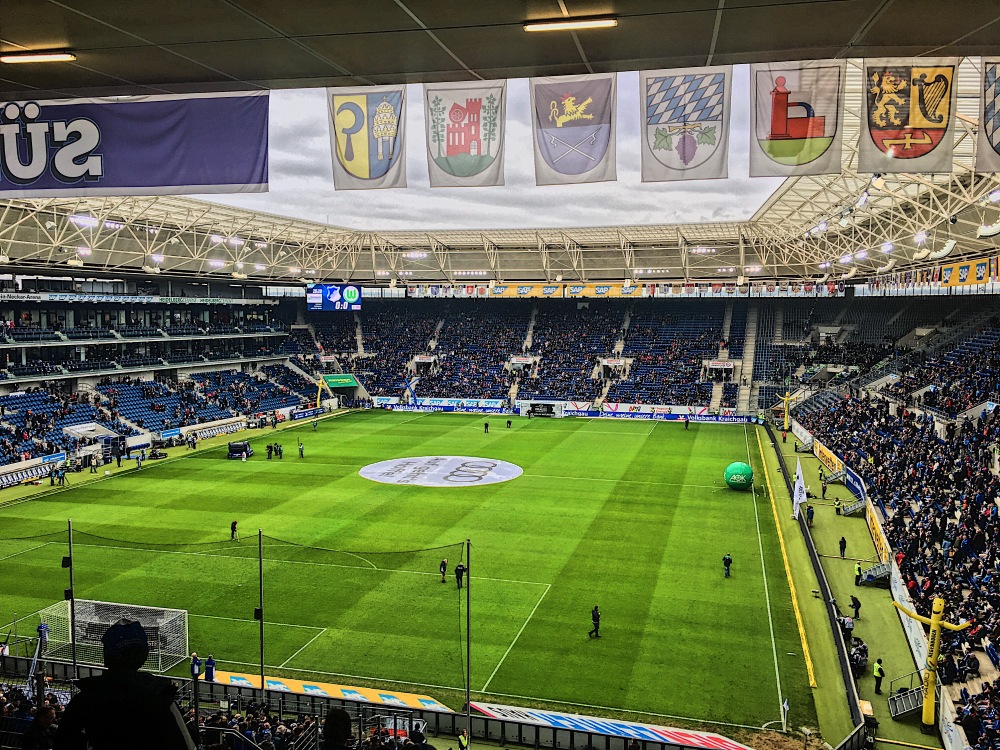 If all that action is not enough, a little outside of the city there exists an open-air theater which was called the Thingstatte. It was built in 1934 for followers of Nazism to gather before Hitler came into power. It was designed to be used as a tool for the Nazi propaganda machine to get the rest of Germany on its side. On its opening day, 20,000 people turned out to hear Joseph Goebbels, who was the Reich’s Minister of Propaganda and Hitler’s eventual successor (though only for a day) speak.

The Third Reich’s influence on the city did not end there. Around the city are plaques in front of the homes where Jewish families in Heidelberg lived before most were taken and sent to concentration camps, with many of them not making it back out alive. It is a sobering experience seeing what happened to these innocent people and sometimes entire families. These two examples from Nazi Germany are just some of the many throughout Germany which you can view to see how this horrible time for Germany terribly affected humans just like you and me. I think it is important when going to a place that experienced this much suffering that you go out of your way to be reminded of our capabilities as human beings and to remember those that lost their lives.

As you can see, for a relatively medium-sized city, there is actually a lot of interesting and fun things to do in Heidelberg, definitely enough to spend at least 4 or 5 days in the city. The colorful, winding alleyways, varied shopping spots, historical sights, and beer, truly make the city a rich and worthwhile travel destination. There is no small amount of beauty in Heidelberg, both architecturally and naturally, even when visiting in the winter like we did. It would also serve as a great place to use as a hub for any European tour as it lies within a five-hour drive of 6 different countries!

Next up, St. Paddy’s Day in Ireland! You do not want to miss this.

1. The Philosophenweg, or Philosophers’ Walk, is a little path on the other side of the river from the castle which has some amazing views of the castle and city below. It is a little bit of a hike but you will be rewarded for it in the end. Just don’t forget to bring a camera!

2. While searching for this post I found that there is a small monastery called Neuberg Abbey on the outskirts of town which is both very old and very beautiful. They also hand-craft their own beer in the on-site organic brewery. It is not advertised in most guides and I am sad I missed it.

3. There are stairs that lead up to the castle from the Altstadt, but they are no joke getting up. I would recommend taking the funicular up unless you are looking for a good workout. On our way down we passed several miserable looking travelers making their way up to the castle!